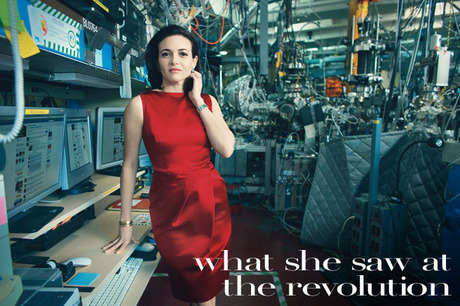 I’d always thought high fashion was kind of sniffy when it came to acknowledging geeks. I thought that if you spent your days tinkering around with code and made nerd jokes on Twitter, it precluded you from being “fashionable” in the strict sense of the word. I doubted that power glamazons would be interested in your job if you met them in cocktail bars.

But – looks like there’s been a sea change marked by a photo story in Vogue this week featuring a host of female geeks: women in tech or in management at tech companies. Two in particular were profiled: Sheryl Sandberg – Facebook’s Cheif Operating Officer pictured above.

Fashion always seems to find power pretty sexy though. And if Facebook and Google aren’t powerful then I don’t know what is. Besides no-one’s that into city girls and investment bankers these days what with the fraud and the recession… so sparky Silicon Valley types are the new elite. Still, I doubt we’ll ever see robot hoodies in Vanity Fair..