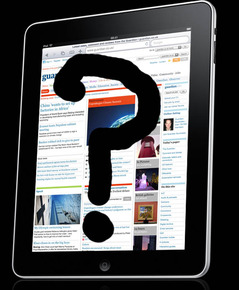 A poll on from UK survey site YouGov shows while we Brits all know about the iPad, most of us are pretty confused about what it actually does. A whopping 70% are aware of Apple’s iPad and it hasn’t even hit the shops yet, but 19% admitted to having no idea what the iPad does, while 37% mistakenly believe it makes calls.

Add in a few more wrong notions: 38% wrongly think it doubles up as a camera and a massive 48% think that one of its primary functions is as a digital photo frame.. and it seems the picture is pretty mixed-up.

It’s not surprising that new device is confusing people – the whole is that is would be different from existing devices like netbooks and phones. Still I hope everyone checks out the specs before storming the Apple shops when it arrives in the UK in late April.

And it could be those Mac fangirl/boys suffering worst: 91% of those owning 3 or more Apple devices were aware of the iPad, but they were just as confused as everyone else.

Still confused? Check our 10 things you need to know about the Apple iPad