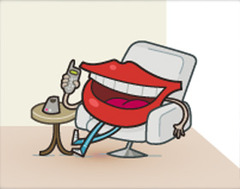 Despite new technologies, we still spend a lot of time on the phone but the quality of the phone calls has gone down, says research by BT.

Overall the amount of time we spend communicating has increased. While that’s largely due to texting and social networking online, we still spend about 4 hours a week on the phone (mobile and landline) talking to friends and family.

But, as psychologist Emma Kenny, employed by BT tells us – more of us are squeezing phone calls into time when we’re doing other things instead of sitting down to have a proper chat.

She analysed 450 calls over a week and found that more than half were squeezed in while out and about or preoccupied with other tasks around the home. These calls were less likely to generate quality conversations (which started on average 2 minutes 48 seconds into calls) and left the caller feeling ‘rushed’ and the recipient ‘irritated’.

Calls made hurriedly in transit (or ‘chit’ for short) are getting in the way of our chat.

I suppose that 20 years ago, people couldn’t have made phone calls while they were travelling because unless they were one of a tiny few, their phone would have been attached to the wall on a cord. With mobiles, the temptation is to fill in a little time while waiting for the bus.