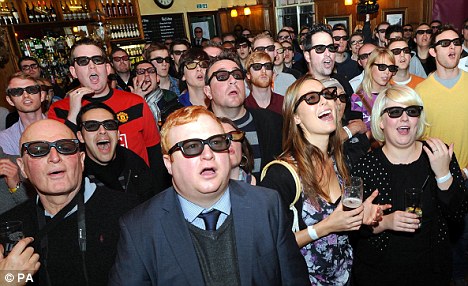 Are you lot into football? Well you’re all in for a treat Saturday 3rd April. Sky will broadcast their first emission of their 3D channel then – showing the Chelsea v Man United Premier league game.

Find a pub equipped with 3d TV and a Sky subscription, pick up some of those dinky 3D glasses with your pint and you and your mates can sit in a pub while John Terry and Wayne Rooney lunge out of the screen.

Sky will show a further five live and 3D Premier League games before the end of the season.

According to Sky: “over a thousand pubs and clubs across the UK and Ireland have already signed up for Sky 3D, meaning that from Saturday 3rd April, hundreds of thousands of fans will be able to watch live 3D Premier League matches this season. More pubs and clubs are expected to sign up in the days and weeks ahead.”