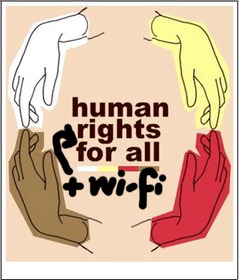 “Everyone has the right to life, liberty and security of broadband access.”

That’s the third article in the UN’s 1948 Declaration of Human Rights, adapted slightly. Things have changed a bit since the late forties and according to a BBC survey, a majority of people around the world think that internet should now be a human right, like clean water, a name, and life and liberty.

“Liberty, Equality and High Speed Broadband for all” wouldn’t have made such a great slogan in other manifestos of human rights, like the French Revolution, but in this data-fuelled internet age, it is increasingly clear that people left off the internet freeway fall far behind very quickly.