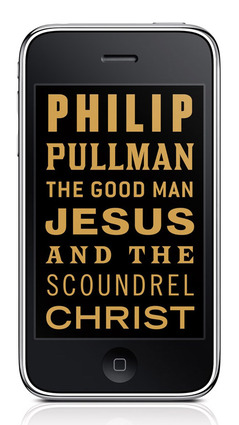 The new book from Phillip Pullman out from Wednesday is getting a lot of attention for two reasons: 1) The Good Man Jesus and the Scoundrel Christ is a retelling of the story of the world-famous Bible story, 2) it’s also being released as an iPhone app.

Only one of those features is making it unpopular with the religious establishment.

Phillip Pullman’s stance on religion is well-known. His famous Northern Lights triology is an intentional satire on the bureaucracy of the church and his new story is proving to be pretty controversial, garnering him a few threats of eternal damnation.

The gist of Pullman’s retelling of the Bible story is that Jesus had a manipulative twin brother, Christ, who tempted him in the wilderness and betrayed him to the authorities. The Guardian sketches out the book’s story:

Using the four Gospels as its source, The Good Man Jesus and the Scoundrel Christ has the naive young Mary giving birth to twins after a visit by a mysterious stranger claiming to be an angel. The babies grow up into the physically robust, straight-talking, straightforward Jesus and the bookish, calculating, often morally tortured Christ.

His take on app-making is a bit less revolutionary. The app of the book is multimedia, but it’s not pushing any boundaries. It includes a full ebook, the unabridged audiobook read by the author and synchronised to the text, as well as exclusive video interviews.

The best feature seems to be the audio/text swap over. Say you tire of peering at your screen you can just plug the earphones in, sit back and listen to the story from exactly where you left off.

It’s a good idea to actively enrich the content available on iPhone apps. And giving the film video interviews available after the book is a nice touch. Only catch might be the price. At £9.99 it is comparable to the price of a book, but significantly more than the average app.