There has been a surge in men joining Facebook in the past two months according to statistics from the Inside Facebook blog. Facebook membership is growing in all sectors, but more more quickly among men.

Looking at growth statistics for February 09 it appears that men are joining at a much faster rate than women in all the younger age groups. 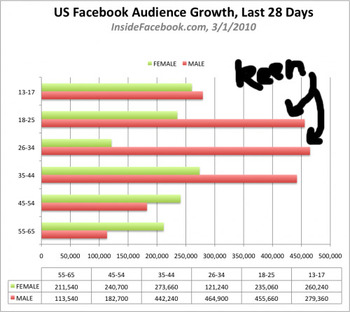 The site membership is still more female than male with 56.6% of users being women. The demographic group least represented on Facebook is older men, not suprisingly half of all members are between 18 and 34. 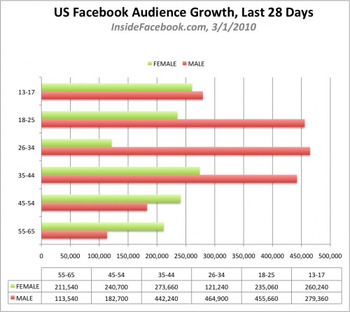 Inside Facebook’s analysis of the shift – men are following women, latching perhaps onto the potential of the site as a place for “dating”/stalking people you fancy. Also of course, since the intial take-up among men is smaller there’s more room for growth. Still shows Facebook membership is very far from reaching saturation point..