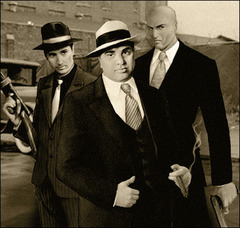 Mafia bosses are never on Facebook in the big famous films, and it really seems that they should keep it that way.

A Facebook session went a bit wrong for Mafia hitman Pasquale Manfredi after the Italian police used high tech tools to work out where he was accesssing Facebook from and arrested him.

Manfredi is wanted for the murder of a rival with a bazooka and other high-profile crimes. While he may have avoided more traditional police snares, the high tech electronic surveillance equipment combined with a weakness for social networking, caught him out after a 2 hour session under his Facebook name Georgie.

But Mafia News Today reports that Facebook works in the favour of the Mafia as well – apparently they use it a recruitment tool.