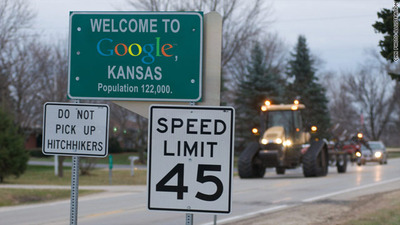 In a weird announcement yesterday, the mayor of Topeka, a small city in Kansas USA, decided to rename his town “Google”, for a month. A decision that will certainly improve the city’s SEO, but sounds, in almost all other respects, ridiculous.

But it’s not just whimsical – the town’s mayor wants Topeka, sorry Google, Kansas, to be one of the places where Google tests out its super-duper high speed internet part of its “Fiber for Communities” programme. He’s hoping the name change will attract Google’s attention to his city and make it one of the 100 locations where the internet giant trials the programme.

Google’s move to provide wired internet at speeds 100x the current average (hitting 1gigabyte a second) has been seen as an aggressive stunt by Internet providers who see it creating immense demand for this kind of service among the public that the the Internet providers will have to step up and fulfill. Google is forcing them to launch a whole new product in other words and they don’t like it.

Back to the key issue here: what if we all started naming towns after internet services? How about living in Picasa, Oklahoma or working in Hotmail, New York. That would be crazy.