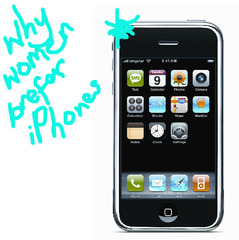 Two or three years ago, on this very blog there would be a steady stream of girl phones. You know what I mean: pink, dimante-encrusted things that would come pre-loaded with girl-friendly ringtones ‘Oops I Did Again’ and would perhaps match with your make-up case and maybe have a mirror on the back so you could check the eyeliner dear.

While these phones have their place in the hearts of many girls and surely some boys, they seem to have died a death. While the odd pink-shelled lovely does swim our way, there are definitely fewer around.

Handsets are always getting murdered in the world of technology journalism (iPhone killer! Blackberry killer! iPhone killer again!) but this time there is a corpse on the carpet and the clues point firmly towards the smooth black inscrutable iPhone. That dark horse.

My theory – alert: Gender Stereotype – is that women/girls like customisation. It matters to them more than it is does to boys that their phone is theirs. It’s not the same as everybody else’s, it’s a bit different. (IE – THIS IS LIKE WITH CLOTHES, you see, there’s a female penchant for individualisation. Boys will practically wear the same t-shirts as each other and not even notice.)

Previously the simplest way to get an individual or different phone was to buy one that looked a bit different, whether it was pink, purple or just had an anime kitten on it. They all texted and sent calls so that was standard.

iPhones have changed the game because it switched the customisation from the outside of the phone to the inside, from the hardware to the software: you don’t need to put stickers on your phone to customise it, you can download some of those those highly successful little software packages called apps and hey presto there’s a newsfeed from your favourite paper, a DJing app and 400 pictures of Robert Pattinson (if you want that).

Add in all the standard smartphone extras – your music, your photos and phones are very personalised devices.

Other reasons women prefer iPhones? okay, Gender Stereotype Alert No.2, I think girls like tech for what it can do rather than treating it as status objects. They are less likely to reel off lists of specs and engage in my RAM is bigger than yours competitions. They just want to know what they can do with it. Back to the app store and it’s evident that apps let you do stuff. It’s all pure function. Hardened geek heads may not be proud to admit that they have iFarm and iDoodle2Lite on their phones, but silly or not, apps multiply many times what you can do with your phone. I like it. I’m just saying, I think women generally like it too.

And let’s just add that girls like smooth touchscreens, fast processors, decent cameras and games where you can flick pygmies off islands (well, I like them) and it makes sense that the sleek iPhone has cleared the board of glittery competitors.

Then, need i mention skins (the cases, not the TV drama)? The iPhone is just a sexy blank slate that appeals to the creativity and desire for individualisation that women have. No need for keyrings or earring holders here…