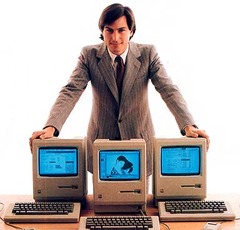 It’s obviously Make-Something-Inspired-By-Steve-Jobs Week. After the horror of the mozzerella sculpture of Steve Jobs’ head, some enterprising TV producer has pitched a TV sitcom based on the Apple CEO’s life.

At least this isn’t yucky.

The show which is making a pilot episode, is called iCON (of course, geddit) aka The Secret Life of Steve Jobs: A Parody.

Produced by Larry Charles who worked on Sacha Baron Cohen flicks Borat and Bruno, we can expect some sharp comedy and mankinis (surely). Even better the script of the pilot show was written by the creator of the FakeSteveJobs Twitter stream.

“Charles will oversee development of the script and will direct the half-hour pilot of a series written by Dan Lyons. A technology consultant for Newsweek, Lyons created the Fake Steve Jobs blog and wrote the novel Options: The Secret Life of Steve Jobs–A Parody.” reported Media Rights Capital, on its website.

The problem with piercing critiques of technology celebrities is that these guys are geeks. Unlike rock stars they spend most of their time on computers looking at code and instant messaging each other. Really, I’m sceptical that there’s enough sex, drugs and rock’n’roll to make this really enjoyable for the average TV viewer.

Still I’m prepared to have my mind changed. Here’s hoping it gets commissioned.