The spectacle industry has taken to augmented reality like a duck to water. They have cottoned to the fact that a little AR camera-work helps replicate the vital stage of letting people try on glasses. 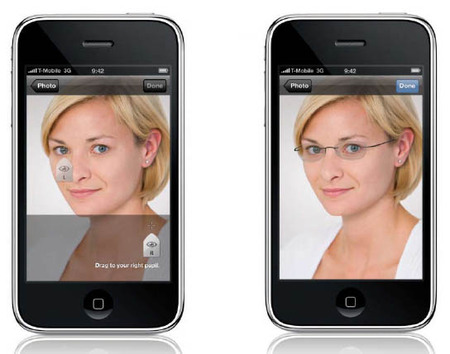 Silhouette, the makers of rimless spectacles have developed a web page and an iPhone app Silhouette Virtual Mirror that lets you test out spectacles on yourself without having to go into the shop and try them on. The web thing is here, and the free app is called Silhouette Virtual Mirror. For a bit I thought that would actually turn the phone into a mirror, which I would like, but no: it just uses a picture of you and superimposes a pair of spectacles on it.

In a similar but less augmented way, The Specsavers I went to had a couple of these live in the shop and it was a treat. A screen takes up to four pictures of you, in theory with different pairs of glasses on, and you can the spectacles by putting the photos side by side.

The other customers when I was in the shop were all a bit too embarrassed to use them properly, but I loved it. Could have spent hours doing that. Anyway, marks to Specsavers for using tech in a useful engaging way…

On other weird cosmetic uses for AR, see this video below of some Japanese software which graphically applies make-up to your face through a webcam.