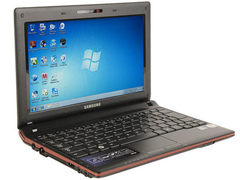 Samsung have just updated a range of their netbooks by adding built-in connections to high-speed 4G internet. That will allow these computers to access very high-speed internet over a mobile connection, making mobile internet as fast as wifi.

The technology needed to connect to very fast mobile internet is called “Long Term Evolution” often shortened to LTE. Described as the last step to 4G internet, LTE is much faster than the 3G your smartphone is currently struggling with.
Samsung say this will be fast enough to live-stream video from the netbook’s webcam, not the sort of thing you could currently do off a mobile phone or a 3G dongle.

Samsung also plan to make a LTE dongle which would bring faster speeds to other computers.

The 10.1 inch screen N150 is currently available on standard 3G internet. The screen is an anti-reflective LED display. It runs off one of Intel’s Atom Processors and does host Windows 7. The N150 prides itself on energy-efficiency and a strong battery performance (8.5 hours use off one charge). It also has two USB ports and a webcam. On the LTE version, all the specs will be the same.

We don’t know when these LTE enabled products will be available yet, but check www.samsung.com for details.
The N150 on standard 3G is currently available for £279 from PCWorld