Samsung’s fluff-collecting bot unveiled in Vienna yesterday is cute. The Navibot is an intelligent floor cleaner with visual and infra-red sensors making it the smartest thing to crawl around your floor since the stick insects died. But the stick insects were never this complex. 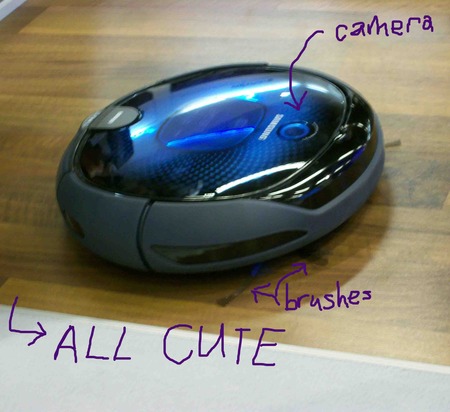 A disc shaped object the size of a soup tureen the Navibot has two processor chips, an embedded camera, sensors and a virtual mapping system. Plus two rotating brushes and vacuum cleaner to pick up crumbs, fluff and loose dirt. What’s so clever is that the bot auto-navigates by turning before it hits an obstacle – unlike the more common automatic cleaners which have to bump into stuff to sense them.

The wide angle camera embedded in the top creates a visual map of your home taking 30 pictures a second. Using this virtual map and combining it with information from the infra-red sensors, the NaviBot identifies the exact location of obstacles such as furniture and then calculates the quickest and safest route to take. When it gets low on charge it automatically returns to its charging dock for 2 hours and once full, returns to where it left off cleaning.
The Navibot can automatically detect what surface it’s on too: carpet, wood, whatever and adjusts its cleaning style appropriately. There’s a remote control too.

Watching the Navibot feeling its way around in the Samsung demo box like the sweet eager-to-please robot that it is, I was definitely impressed. Cute? Yes.

On the con side however, it was quite slow and it doesn’t cover the edges of a room or around the base of items like sofas or chairs. So it won’t replace your standard vacuum cleaner, especially if you want the job done quickly.

It’s also not so good for anywhere with steps or busy houses – there’s an obvious tripping risk in that while the bot knows perfectly well what it’s doing, the movements could seem unpredictable to humans, it might be avoiding where the armchair was last week by suddenly reversing, but you’re not to know that.

What would be sweet however is if you set it to clean before you left for work in the morning, you could come back and find one floor of the house nicely vacuumed without having to lift a finger. Good bot. 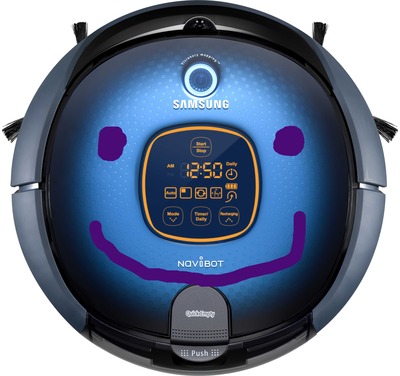