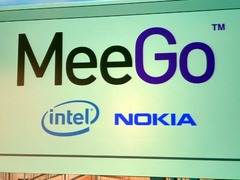 Well, taking all the “biggest”s into account, it doesn’t take a rocket scientist to tell you the results could be big. It looks like the two companies plan to pair up to make a new Operating System which will be called Meego and launch in the summer of 2010. The new platform will supersede Nokia’s Maemo, used in a few high end devices, and Intel’s Moblin platform which had been developed to target tablet-like devices.

The two plan to bring this OS into new devices including tablet computers, handsets, netbooks, in-vehicle systems and even LCD TVs. One of the first devices to run it will be the Nokia N900. Apps for both Moblin and Maemo will be compatible with MeeGo.

Because MeeGo isn’t locked to Intel or Nokia, other hardware manufacturers could embed it in their products meaning that the platform could spread rapidly.

Most Nokia phones currently run on Symbian, and while there aren’t any immediate plans to replace that, if they did phase out Symbian in favour of Meego, the new OS could become one of the biggest in the world.

Despite being the world’s biggest manufacturer of mobile phones, including the N97, Nokia has struggled to make any big hits recently, and the attention is Apple and Google who are pushing innovation in the field.

One thought on “Nokia and Intel pair up to make new OS: Meego”