Got an iPhone? Feeling a little bit sadistic? Well, maybe you should download Pocket God – 2 million people already have.

The app game by a two man team from California, claims to be the only paid-for app to have topped 2 million downloads.

What are the reasons for its success? It kind of is 59pence of fun. You are god over an island of pygmies and can pick them up by their hair, drop them in with the sharks, make dodos fall out of the air, burn them, make them fish or dance, transport them to the artic and just flick them around, smiting them a bit. Leave the pygmies to their own devices and they fix their hair, go to the toilet, drop their pants, sort of lark around.

It’s like one of those games kids play where they squish insects as a quiet form of amusement. I’m not going to give it any marks for political correctness: both God and pygmies could feel quite offended by what goes on in Pocket God, but I can see the attraction of playing.

Where this game wins out is in its updates. Lots of apps stay pretty static after you buy them, just issuing updates to resolve bugs. These guys release some fun new quirk practically every other week: ice monsters, igloos.. more weird stuff, that seems to make people keep coming back and spreads the word about Pocket God.

It’s not a hardcore game nor particularly skills-based but it is lively and you finally get to be god of a small tropical island. 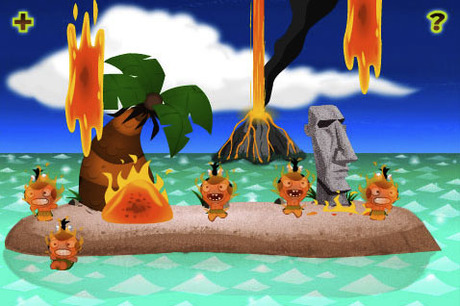