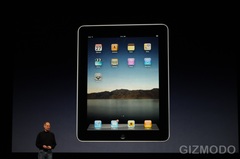 “Is there room for a third category of device in the middle? Something that’s between a laptop and smartphone.”

This device needs to be BETTER than a laptop or a smartphone at these types of devices. “Or it has no reason for being.”

What do we know?
– customisable background
– iPhone OS
– with HD youtube app

Looks exactly like the rumours from the last few months… it’s a big iphone..

UPDATE:
– Full capacitive multi-touch screen. Not OLED
– One 1ghz Apple custom chip. 64 ghz of flash storage, wifi.
– Can you use it to take a phone call? no, doesn’t look like you can.
– Battery life 10hrs – 10hrs on video, a month on standby
– Google Maps application, location sensitive

UPDATE 2:
– no flash support
– no camera