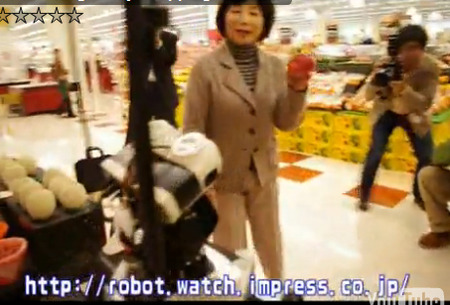 Why carry your shopping yourself when you can get a robot to do it? Okay, they still have trolleys rather than robots in the average British Tescos, but in Japan… they have bag-carrying robots. FTW Japan.

The robotic shopping assistant from company ATR is designed to make shopping more convenient and entertaining for the elderly. About the same size as a child, it’s a lot more useful and carries the shopping while you potter about picking up satsumas and suchlike. The Robovie-II android nods its head, says thank you, recommends the apples and make suggestions about salad ingredients.

Judging from the video below, it certainly does make shopping more entertaining: the entire shop stops to gawp.

To use the system, shoppers first create a shopping list at home by simply telling the robot’s on-screen avatar on a mobile device what they want to buy. Later, when the customer arrives at the store, sensors automatically detect the customer’s individual mobile device. The user’s data is wirelessly transmitted to a waiting robot, which greets the customer by name and says, “Let’s start shopping.”

The 67-year-old lady in the video below said that she thought it was fun talking to the robot, but a little plaintively that “she felt almost as if she were shopping with her grandchild”. Note to grandchildren: your grandparents still prefer you to robots – go shopping with them more often.

I hope these come to Britain.