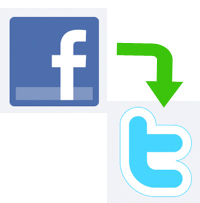 Facebook’s new age of Glasnost and Perestroika hit another milestone today when it announced that users will be able to post to Twitter from their Facebook profiles. The change should be in place by the end of the week.

Over the past few months Facebook has been opening up to the web: encouraging users to shift more of their content into the public domain and doing a deal with Google to get content showing up in searches.

Web services like Tweetdeck or Friendfeed already allow you to publish to multiple social networking sites so the idea of using one site to post to another is not that revolutionary. More significant is Facebook’s acknowledgment of Twitter as useful public broadcasting service, something that it wants to offer its users.