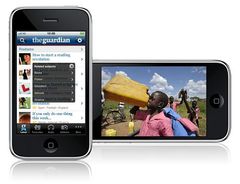 The Guardian newspaper has just released an iPhone app. Currently, ad-free, it contains all their content and costs £2.39.

The Telegraph and the Independent already have iPhone apps (for free) and, best-known of all, so does the New York Times (a freebie, again). As an overall comment I’d say the Guardian app takes the New Times model slightly further by offering you more ways to negotiate the content. It splits up content into categories which are easy to access. You can customise it more as well, which makes it a more complicated app.

The Guardian app costs £2.39. Is that a problem? No – judging solely by my own reaction, I don’t think it is. Though I rarely pay more than £2 for an app, I do spend at least £2 a week on newspapers and this slotted itself in that budget in my head. That’s only 39p more than the Observer right? And I get all Charlie Brooker’s recent columns in one place.

Key features of the Guardian app include…
1. Ability to customise the homepage. This is a big deal. I was quite put off by football headlines taking up a third of my home page on first opening. Go to settings, and choose the six sections you want to be on your opening page.

2. Galleries. These have a nice horizontal sliding widget on the homepage. And quality photography makes use of the iPhone’s good picture resolution, letting you flick through photos like you would on a facebook album.

3. Podcast section. Uniquely – I think – for a newspaper app, it has got an audio section where you can listen to the Guardian’s weekly podcasts.

4. A Trending section. Separate from “most viewed” you can see a list of popular topics on the Guardian. Right now for example, it’s the Premier League, Ryan Giggs and Television. Click on the topic and it takes you through to a list of articles about it. How do they decide what topics are trending? I don’t know.

5. You can browse articles by columnists: great because this is a key draw of the Guardian. Get all of Charlie Brooker’s last 13 pieces in one place on your phone.

Improvements I could suggest straight off:
1. Automatically downloading your favourite sections when you open the app. The New York Times app does this and it means I can switch it on before getting on the tube and then read it anytime… With the Guardian you have to go through about 3 to 4 clicks for it to download things.

2. I’d like an option to turn the pictures off on the homescreen… though the use of pictures differentiates it from the New York Times, it make the homepage screen look quite busy. Well, that’s my personal preference anyway.

3. Video – if the Guardian app is going to go all colourful and multimedia, they could get some of this in.

Any other thoughts or improvements you can think of? Comments welcome below.