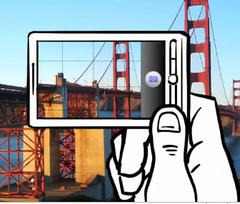 Google have announced a new app for Android phones which lets you search with a picture instead of a word. Take a photo with your Android phone and the search engine scans it and then finds similar images for you, which it displays in standard image search way.

For example: snap a shot of Big Ben on your phone, “google goggle” it and the search engine will turn up thousands of similar images. Big Ben from different angles, different lights, different times of the day….

“In the nature of computer vision we are at the beginning here and the technology is just getting underway,” said Google’s vice-president of engineering, Vic Gundotra, on the BBC.

Enhanced with GPS, Goggles works particularly well on landmarks, local businesses etc, but less well on things like food, animals, plants and people: but they’re working on it. In the future, Google hope, Google Goggles will help you to recognise trees by photographing their leaves or or even plot the next move in a chess game. Pretty amazing.