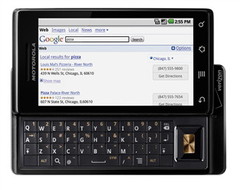 It has been a while coming but apparently Motorola’s hottest new smartphone, the Droid (aka the Milestone), will be landing in the UK within five days. According to website thenextweb it will be on sale via the retailer Expansys by the end of the week. There’s no confirmation as to which networks will take the Droid. Moto’s other recent smartphone, the Dext is on sale via Orange.

The Droid has been a big it in the US with reported sales of over 250,000 in the first week. Its key features are really good quality speakers, integrated turn by turn GPS satellite navigation, plus a corking 3.7inch high resolution screen and very usable full QWERTY keypad.

The handset costs £449.99 contract-free. It’ll be interesting to see how it fares in the UK