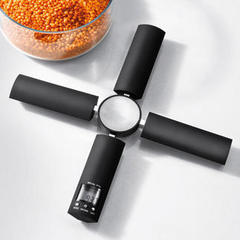 I don’t want to play into the hands of gender stereotypes but an item that caught my eye recently was a kitchen gadget. Maybe I’m subconsciously craving cake and baked goods but the combination of kitchen paraphernalia and space economy really appeals. My current set of scales is a chunky analogue thing; which sits there in the cupboard taking up space, snidely judging my canned soup collection with its bulky, difficult to read face. I resent it.

So this product would be nice, a set of scales that folds up into a 5cm diameter cylinder with a height of 12cm. I’ve got tubs of salt bigger than that. It unfolds to 22cm in diameter so you can use fairly large containers to weigh your items if you were that way inclined and weighs up to 3kg with a 1g accuracy. It used 2x AAA batteries and it costs £33.95. It’s quite a masculine design for something destined for the kitchen but they’re also marketing it at people who weigh post at home. The LCD display also doubles as a clock and apparently there’s a 60 second timer, although – can that be a typo as I can’t think of anything that takes less than a minute to cook.