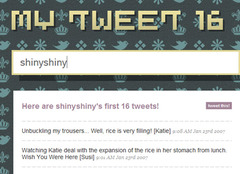 New site MyTweet16 is the Twitter equivalent of a baby album photo.

It’s not rocket science – all it does is show you your first 16 tweets. It is pretty cute though – see your first faltering steps in microblogging, remind yourself what the weather was like in April 08.

These are first 16 tweets of great Twitter Lord Stephen Fry.
This, in fact, is the first one:

I’m impressed – he jumped straight in there.

And back in the day, this is what the Susi and Katie were saying on the Shiny Shiny Twitter on 15th Jan 2007.

These are the first four:

Dragging ourselves out of bed and into the shower, ready for another day of hardcore blogging. [Susi] 2:09 AM Jan 16th 2007

Telling Katie off for not doing her work, and looking at the naked boys in the building opposite. 10:46 AM Jan 15th 2007

Of course they just chose sixteen for the sweet 16 joke, but 16 is actually a good number, the average first five tweets are people saying “Oh hi, how do I use this?” or “Just getting the hang of Twitter”.

In my case the first tweet is “Signing onto Twitter”. Christ that’s dull. True maybe, but interesting, no. You have to start breaking the 6th tweet before before people get interesting and work out how to use the @ function.

Ideally MyTweet16 will show you how you’ve progressed – how your life has got more interesting, your twitter conversations faster and funnier. But sometimes the horrible realisation dawns, that you are doing exactly the same things in 09 as you did back in 08.

There’s probably an eternal truth in there.

One thought on “Your baby tweets: MyTweet16”