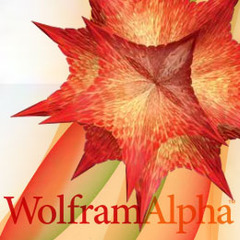 Wolfram-Alpha the company behind the Wolfram-Alpha search engine have just released an iPhone app. Sometimes you just know when an app is more intelligent than you, and straightaway I had that feeling.

It’s like a web-connected graphing calculator, with access to vast database of chemical compounds, nutritional data, geographical information, financial data, Giving it, according to Read Write Web, the ability to solve pretty much any math problem that a high school or college student will ever encounter.

Okay, so that makes it even better than a graphing calculator. It’s not just us who feel slightly boggled by this, Wired described it as “like having a squad of Cambridge mathematicians and CIA analysts inside your browser.” (as quoted on iTunes).

Wolfram Alpha are company with a bold idea – to break down and search the web by data rather than by documents, as Google does.

In theory, it means Wolfram-Alpha could pick up bits of info from one place, add them with bits of information from another place and actually generate new knowledge. The classic example they give is: if you wanted to know how many Nobel Laureates were born on days when there was a full moon, (one of those questions that’s always cropping up) the search engine would be able to tell you.

Google would only be able to tell you if someone had already sat down, worked it out and published it on the web. But in theory WA could work it out by finding the birthdates of Nobel Laureates, match them up with back-dated lunar calendars. All in the time that it takes for a standard google search.

Yes pretty WOW. Whether it actually manages to deliver on these promises is another question, with the search engine failing to answer lots of basic searches.
This iPhone app is a side-project but works on the same principle of data searching rather than. If you’re an iPhone user who’s been looking for a web-connected graphing calculator, well, your time has come.