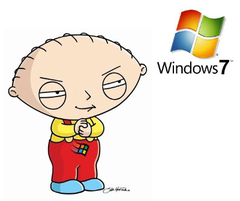 In a hilarious turn of events, Microsoft execs have pulled the plug on an episode of Family Guy they sponsored as part of their publicity campaign for the launch of Windows 7.

The collaboration with sassy foul-mouthed cartoon Family Guy was part of the company’s attempt to be down with the kids. It seems to have backfired rather because the Windows 7 episode is – yes – much too sassy and foul-mouthed for Microsoft.

This is what Microsoft had to say about their about-turn:

“We initially chose to participate in the Seth and Alex variety show based on the audience composition and creative humor of ‘Family Guy,’ but after reviewing an early version of the variety show it became clear that the content was not a fit with the Windows brand… We continue to have a good partnership with Fox, Seth MacFarlane and Alex Borstein and are working with them in other areas. We continue to believe in the value of brand integrations and partnerships between brands, media companies and talent.”

It seems to have been the jokes about “deaf people, the holocaust, feminine hygiene and incest” that they felt did not fully embody the values of Windows 7. Seriously though, what did they expect?

This farce is almost as funny as an episode of Family Guy. Not quite though. Neither Microsoft nor Family Guy have come out of this very well: Microsoft of course look like they a) can’t take jokes very well b) never watched Family Guy in the first place; while the Family Guy creators have still sort of sold their soul for big corporation money.

All I know is that I want to see this shafted episode of Family Guy really badly. How do they work all those offensive topics into a programme about Windows 7? Do they compare Vista to the holocaust? Imply that Microsoft users are deaf? Is the ‘Cloud’ like a tampon? What? I want to see.

Related: A mystery film, a secret location, some Microsoft employees: that’ll be Secret Cinema collaborating with Windows Mobile then