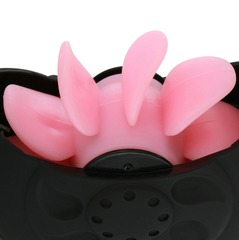 The company has been planning this launch for a while now and we’ve had our hands on a sample for a few weeks but of course we haven’t been able to share it with you guys until now.

At first glance this gadget does look a bit scary. It’s a wheel, of er, well synthetic tongues that go round in a choice of three speeds, and is said to do the job nicely. Hence the rather clever name Sqweel. But the strangest thing is that it doesn’t vibrate.

Love Honey describes it as “a revolution in orgasms! The sensational new patent-pending oral sex simulator has a wheel of ten teasing tongues that will lap you to orgasm time and time again.” In fact the company is so confident of this little miracles powers, that it’s offering you your money back if you’re not, well, satisfied.

If you want to get your thighs..sorry, hands, around one of these visit the site now.