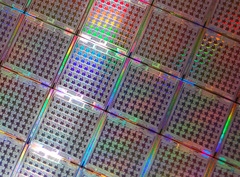 With 8-core chips being the current wunder-boys of the chip world, and with most new computers sold today featuring dual or quad-core chips, it may come as surprise that the new chips on the horizon aren’t 12 or 18 core bits of silicon, but 100 core.

How the hell do they fit the extra 92 cores in?

I don’t know, but a semi-conductor company called Tilera with connections to MIT university in Boston claims they do, and their 100 cores processors are expected to be on the market from early next year.

Made using 40-nanometer technology, the chip would break Moore’s law that states that the number of transistors on a chip doubles every two years.

Current chip architecture from companies like Intel is limited by information gridlocks forming in certain central junctions, but by adopting a mesh architecture, those clever MIT kids seem to have side-stepped the problem.

When would you ever need that much power? “If you need huge computing power, say for instance to encode and decode multiple video streams, our processor can do it at much more efficiency than Intel chip or a digital signal processor,” Agarwal of Tilera tells Gadget Lab. We imagine games would be a bit more exciting riding on a 100core processor as well.

Not that Intel are lagging behind – their research labs are already working on a similar idea. Last year, they showed a prototype of a 80-core processor, which they promise will be available to consumers in about five years. Given that it’s unlikely the Tilera chips will be making their way into the average PC in a hurry, best to hang on for the Intel version unless you are encoding multiple video streams or are one of those must-have-the-latest-chip types.

Related: Alton Towers introduce RFID chips to give you a personalised experience