I don’t know about you, but I’m terrible 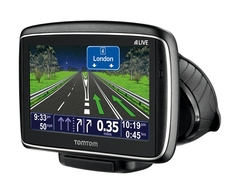 asking for directions and prefer to get lost than embarrass myself. So I’m really pleased that TomTom has launched some more sat navs.

The TomTom GO 950 LIVE, TomTom GO 750 LIVE and TomTom GO 550 LIVE all have the company’s IQ Routes technology, which calculates routes based on the real average speeds measured on roads every day compared to speed limits.

Using this data it can then give you routes based on avoiding areas that build up traffic at certain parts of the day.

The sat navs are also said to give drivers all the information they need about their journey before they set off, through the new LIVE snapshot feature. This includes road safety alerts and petrol prices of the stations you will be passing on your journey.

Once on the road, drivers automatically receive real-time updates on what’s ahead, so they remain informed throughout their journey.

Those of us concerned about the environment will love the new Eco Routes option, which lets choose the most fuel-efficient route.

We haven’t got any prices yet but as soon as we hear we’ll let you know.