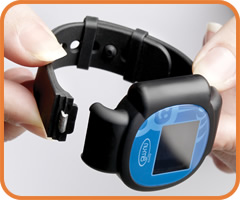 It was only a matter of time before someone thought of locking tracker devices onto kids. You can get GPS dog collars, why not GPS wristbands?

Nu-m8 – the world’s first GPS locator specifically designed for 3-12 year olds – has just launched to the UK and the makers claim: “it is set to change children’s outdoor play forever.” – because mum and dad will now be able to track the exact location of their wandering children on any computer or mobile.

Yes it is the same technology as used for tagging offenders on curfews – but from a quick twitter poll we conducted it seems to be popular as an idea among parents.

The idea behind the device from Lok8u (keep up with the txt spk) is that children will have more freedom, not less. Their parents will let them roam about more freely because they’ll know instantly where they are, so children will play outside more, bringing obesity rates down and they’ll all be more rosy-cheeked and healthy. Nice idea.

Nu-m8 uses the technology that’s already in phones and that has been used to track children before: apparently it’s the locking wristband that’s new. It looks just like a watch, but is a little harder to remove. We quote: “A web of reinforced steel runs through the rubber strap, to ensure it can’t be broken. If nu-m8 is forcibly removed, an alert is sent to the designated mobile phone and/or email address detailing the child’s location to give parents an immediate warning of potential danger.”

When it’s working normally parents are alerted about their child’s position by email, as regular updates giving the closest address with postcode and a link to Google maps. The location is accurate to 10feet.

Alternatively – parents can set a safe zone via their mobile or computer and as long as the child remains within this area no alerts will be sent, although the device will still communicate back the location if requested. 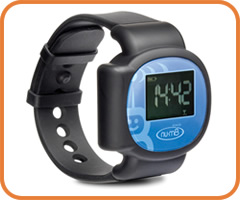 If children do stray from the “safe zone”, a priority alert is sent to the parent’s mobile phone and computer. Equally, if the child returns to the “safe zone” a confirmation text/email is sent.
At any given point, parents can text or email nu-m8 and see the location of their child on a map or be given a link to their location.

Would you use it?
Twitter says yes: “quick office poll of parents – resounding, “yes” they would use them.” @spacefrog29 says.

And my mum agrees… though a problem that everyone flags up is the age limit: @belfastkoala: “re child GPS, 9 year old yes, 12 year old probably, 17 year old no way. But I’ve only got a dog.” And from @sweetlux: “If child is old enough to be alone, they are old enough to remove wristband.”

Kids might have a tough time trying to remove it if there’s webbed steel inside – however you’re not going to get this on a teenager – which is probably why the manufacturers are targeting it at 3-12 year olds.

An alternative solution for the 8-12 age bracket: give them a phone, teach them to use it and get them to ring you. As advocated by @alasdairf and my mum.

There are a few voices on personal freedom: @oneplusiphoto says: gps tracking kids? good god, what is the world coming to. And @tree183 says: I think the idea is appalling. What happened to trust?

A final thought is internet signal – what if it cuts out? It happens maybe one time in 20 on my phone, and that’s in London, coverage in other areas is worse. With google maps on a phone we just shake it and wait for a bit, but if you were nervous about your child… you could jump to the wrong conclusions.

Perhaps a reason that trust and mobile would be better. Any more thoughts?

nu-m8 comes in black, blue or pink, priced at £149.99 and is available to buy now from www.lok8u.com and Amazon.co.uk. In addition, there is a monthly subscription charge starting from only £4.99 dependent on the selected usage tariff, see lok8u site for details.