Ah, so you thought augmented reality was a whole platform for new and exciting ventures that would improve humanity.

Well it’s also a whole platform for human beings to do those random whimsical things they’re so good at. Like make fake mouths that actually move when you speak like it’s your real mouth – yes!

Meet Mouthoff, one of those apps that takes cutting edge technology and does something fun but slightly pointless with it.

A range of a different mouths are available (designed by a range of Mouthoff artists) and as you speak the little cartoon mouths widen, crease, shut and open – in time with you actual mouth (!!) Well, to an extent they do, though because it relies on the microphone to detect your sounds and then match them up to the appropriate mouth shape, it depends on the sounds you make and whether your speech is “normal”.

In a similar vein here’s a web app that launched as publicity for Transformers 2: it plonks the robot head of Optimus Prime’s robot headhelmet onto a webcam image of your head.

Not rocket science and not consistently fun either – the amusement runs out after about 90 seconds – but yet interesting. 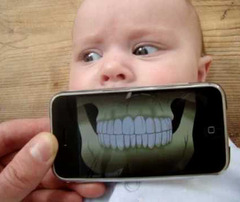 Being able to design your own virtual head would be an improvement on this. A sort of avatar that you could then pin to your movements and facial expressions so that it grimaced as you did and crinkled up its eyebrows just like you do whenever Twitter malfunctioned.

Better yet would be if that avatar became visible when other people pointed their smartphones at you, letting them see the hilarious computer graphics creation that you really are on the inside.

In meantime, you can show Mouthoff to your friends in the pub.