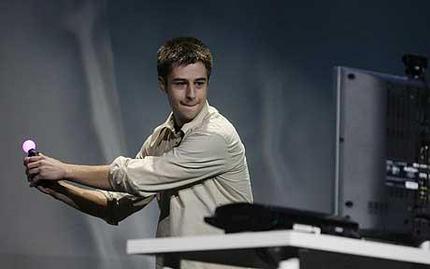 The battle for the console crown is full steam ahead, as Sony reveals its new ‘Wii-like’ controller for the PS3, which seems to directly rival Microsoft’s Project Natal. This woks by using a Playstation Eye camera to connect with the newly designed remote, which vaguely resembles a magic wand, with a flashing pink orb at the top.

The camera uses the glowing orb to triangulate your position and seamlessly sync your movements with the action. They say they can be accurate up to 7mm which sounds extremely impressive as well!

The wand features buttons which can be used as triggers in shooting games, or turned into other device such as a sword/fishing rod- potentially even Wii style cookery devices (hey, Cooking Mama did very well!).

There’s no release date for this project as yet, but it seems the lure of Wii-like gaming is not over yet.