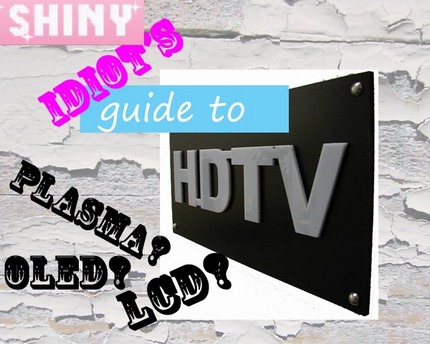 So you’re thinking of buying an HDTV? Congratulations, you’ll be entering the world of hi resolution imagery, and getting a picture so sharp it will make you want to start attacking your old TV with your fingernails .

But what should you buy? With three main technologies on the market, you’re entering a confusing world of LCD, Plasma and OLED, not to mention pixel ratios, bezel size, and of course… price. Well we aim to clear up the confusion, and we’re going to use short little words to explain all those baffling terms.

Firstly, I’ll explain the nature of HDTV. It stands for High Definition Television and gives you a sharper high resolution picture, because it contains more horizontal lines. Regular TV’s contain around 576 lines on the screen, and an HDTV packs in at least 720, which makes the picture a lot more detailed. The more lines means the image contains more pixels, which means it will be sharper, clearer and colours will appear brighter and more lifelike.

To fully benefit from the features of a HD television you ideally want to use it watch HD programmes, some of which area available free on FreeSat (such as BBC HD) and other which require a subscription (via Sky/Virgin etc). You can also use it to play Blu-ray discs on which will give you the full benefit of your purchase, and if you use a console like the XBox you want an HDMI connection to view the full detail.

But how do you choose which one to get?

If you’re looking for a slimline piece of kit it’s going to be LCD all the way. Due to the nature of these screens they’re slimmer, lighter and just as big as the plasmas, so will take up significantly less space in your home.

OLED screens are equally slim, but seeing as the largest OLED screen available is the SONY XEL-1, its11 inches are probably too small for your needs. We may have a 40 inch OLED by 2010 in which case we’ll re-evaluate this article.

Verdict: It seems that it’s LCD all the way.

The OLED utilizes cells which respond ultra quickly to light, and measures signal response time in microseconds which is HUGELY lower than the millisecond response rate in LCD’s. What this essentially means is that blacks on an OLED screen should look as dark as your worst nightmare, which means the picture will look ultra bright and dynamic. Plasma TV’s work by using an array of ionized gas cells which activate to produce colour. Tests have shown that plasma sets tend to produce significantly better images than LCD when viewed on 50+ inch sets as well as having a great range of picture contrast and greyscale options. So what do LCD screen bring to the mix? Well they offer us a huge variety of screen sizes and 1080p resolution, which is as good as you can get. They’re known for providing picture uniformity, and they do this by applying voltage to liquid crystal cells to filter the colour to the screen. However they won’t give you the same depth of colour as a plasma or an OLED screen .

The Verdict: The OLED wins outright, but Plasma is a close second as it’s actually affordable.

OLED longevity tends to be the shortest out of the three platforms as the power that the cells consume mean that it lasts approx 30,000 hours. LCD displays come in at around 60,000 hours with a plasma of the same size coming in at a lower rate. Remember- though you may be quoted a higher lifespan by the manufacturer this all depend on you looking after your set, and making sure it’s programmed to work at its optimum level. All three sets will wear with time, and this doesn’t mean they will fail completely, but picture quality will lower as some pixels get ‘burnt’ out.

Verdict: LCD wins, but plasma is catching up quickly.

The OLED TV may have the best picture you’re going to find on the market with blacks which are ever so true and gorgeous, but still costs in excess of £2000. LCD and plasma TV’s tend to be fairly equally priced, with the difference being more about the specs than the final cost price- so you’d be choosing between features such as frame rate and aspect ratio rather than screen size. And when you’re eyeing two different models, it’s also a good idea to read actual reviews like this comparison between the Sony X900F vs X950G.

If you’re looking for the best picture available you’ll be opting for OLED, but if you want something that’s sleek, lightweight, lasts a long time and is affordable LCD is your man. Plasma TVs may have better image quality but for form factor and longevity LCD rules the roost.

Loads of models from different manufacturers are available. For example you could decide to get a Panasonic HDTV. (For ratings and reviews see LCD, HDTV and plasma TV options.)