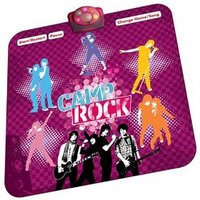 There’s very little information about this mat other than the fact that it has the ubiquitous Jonas brothers on the front, so whether that’s enough of a selling point for you, will be anyone’s guess.

Having accidentally downloaded the film, it quickly got deleted when I realized what a bunch of neophytes they were but nonetheless, they do have an army of teen fans. The Camp Rock mat features a mere 4 (too many or not enough?) songs from the movie that you can pound away to, and you go through the different levels of difficulty by following the lights on the mat. Think of this as a poor mans version of DDR and you’ll get the idea, but at least it won’t break the bank (and you do get to stomp on their faces…)