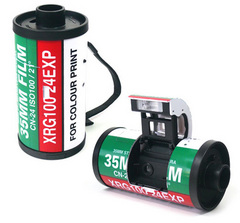 It’s been a few years since I’ve seen one of these old skool beauts, but it’s not a roll of camera film in the traditional sense. No, this oversized 35mm film has been pimped up to pack camera capabilities. How capable it is as a camera I don’t know, as its spec information appears to be a tad on the scant side, but it is pretty cool though. It could even be used in undercover stealth operations. Although, why you’d be carrying around an oversized 35mm roll of film would be anyone’s guess – perhaps you should carry around a novelty retro camera as well to justify your covert operation.

It’s almost a mockery of the poor and soon to be forgotten camera films – there isn’t much use for them anymore now that we’ve entered the truly digital age. It’s called the Transformer camera (although there are no indications that it can transform into a world saving/destroying robot) and unfortunately it’s only available in South Korea for $20. So if you happen to be in that neck of the woods…