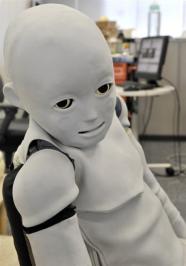 We’ve seen a lot of sinister attempts from the Japanese to bring us a robot with human-like features and they’ll get there… eventually. It’s just right now, they’re still in the very freakishly scary/nightmare inducing stage. But hey, if you want to experience what it’s like to have a kid akin to Damien or the little boy in Pet Cemetery (basically, a very *very* creepy child) but don’t want to be responsible for producing the spawn of evil, might I suggest waiting maybe a few years for one of these absolutely ghastly robotic creations. CB2 is slowly developing social skills (and his plan to take over the world) by interacting with humans and watching facial expressions. It can also dangle its legs and from a chair in a very child-like way, move its shoulders while breathing and follow movements with those disturbing black eyes.

But scary design aside, this is one sophisticated robot with pressure sensors to recognise human interaction that’ll enable the four foot humanoid to learn just like a real boy. It is hoped CB2 and other sophisticated robots will be our receptionists, security guards and even primary school teachers (are they trying to traumatise the kids?).

Read more about it here