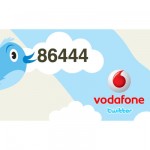 Vodafone users are in for a Twitter based treat as it’s been confirmed SMS Twitter updates are returning to Vodafone’s mobile service in the UK. The good news doesn’t end there, oh no. Not only has the SMS service made a return, but users will be able to send and receive tweets for nada, nothing, zilch.

Before you do anything, you’ll need to activate your mobile via Twitter’s settings, then simply dial 86444 each time you want to report on your day to day activities.

But don’t frown too much if you’re not a part of the Vodafone network, Twitter co-founder Biz Stone confirmed “Twitter will continue to make arrangements with operators”, which could see other networks joining the complimentary Twitter SMS party soon.