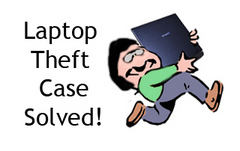 Every now and again, the rules of life dictate that some poor unsuspecting unfortunate must have his/her life turned upside down by having their laptop stolen. And sadly, we don’t have any control over these rather unpleasant rules – such is life, as the old adage goes. But wouldn’t it be great to hurl as much expletively filled abuse at your laptop thief, should the situation arise? Of course, it would be even better to actually catch them, but sadly that is hardly ever an option.

When it comes to laptop theft, it’s more than likely the thief will strike when you’re unaware, as opposed to that handbag snatch style often used late at night on the streets of London. This means you’ll never get to fill out your soap filled fantasy by uttering the words “stop, thief”, while legging it up the road after them. But there is a computer program that’ll shout those words and generally abuse the crook for you. And you don’t even have to be there.

Using this hi-tech abuse service, victims can log on to any computer when their laptop has gone on a walkabout, and send a message to their machine. And the best thing about it is you’re not restricted to that pathetic aforementioned utterance. You can leave a spoken message completely composed by you, with no limitations (so expletives a plenty). This message can be set to reappear every 30 seconds, even when it’s closed the thief has no escape (well maybe when the battery dies).

Does it resolve anything? Well no, not really. But will it make you feel better? Hell to the yes. At least the clever software also tracks what ISP the thief is using to assist the police in finding its location, then eh? But something tells me if the police do manage to track down the stolen laptop, it’s probable they’ll find it smashed into smithereens as a result of the thief’s frustration at the overplayed message.

The package costs £21 and currently only works with Vista and XP. It certainly helps to be a PC as Mac users will have to wait a little bit longer for an Apple version.