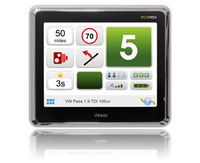 If you’re a car owner who’s eco-conscious the Econav is a great way of assuaging your guilt. The idea behind it is that you’re purchasing a premium looking satnav, equipped with the usual features such as GPS, gear change indicators, speed indicators and traffic alerts, but you’re also getting their customised Econav technology built in.

And what does that mean exactly? Well the idea is that it will help save you money on fuel and cut your carbon emissions, and it does this by analyzing various route options and giving you an eco-related readout of the potential cost to yourself and the environment.

You input your car details, fuel type and occupancy level, and you’ll be directed on routes that are kindest to your needs- for instance if you carry five people, a motorway might take longer, but will use less fuel, opposed to carrying that load down rickety country lanes. They say that within six months you’ll have saved over £200 by using its suggestions- which will have paid for the device!

Lookswise it resembles a Navman-esque device with a clear high resolution colour screen, with size varying from 3.5 to 4.3inches. It’s rather stylish and I like the idea that you could save cash, but I wonder if its eco claims are rather spurious- as you’ll be shelling out cash for this device AND still driving your gas guzzler. But hey, if the guzzling goes down a notch everyone wins right?