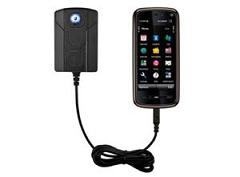 Here’s a bit of electrical trivia for you. You may think that leaving your mobile phone charger plugged in isn’t doing much harm or couldn’t possibly be the cause for your annoyingly high leccy bill, but you’d be WRONG. Did you know that being unkind to the environment and leaving your charger plugged in, wastes around 95 percent of the energy used? Not only is this unfriendly to the environment, but it’s your wallet that ends up bearing the brunt of your energy homicide.

There is the recently announced universal phone charger, designed to standardize all phone chargers with a micro USB connector. But considering 2012 is being touted as its release date, perhaps the Carphone Warehouse’s solution will suffice for now. It’s called The Eco, and this thing is all about being green.

Apparently, if we all got one, we could all save the UK approximately 217 million kWh of electricity per year. That’s the equivalent to the annual energy consumption of almost 66,000 households. If you want to get involved, it retails for £22.99 here.