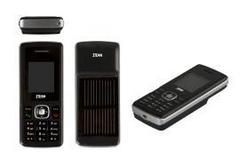 It looks like Samsung isn’t the only one with a planet saving agenda this year. Also grabbing a piece of the solar powered mobile action at MWC is Chinese manufacturer ZTE and its super green Coral-200 Solar handset. It’s just been launched and promises to be a saviour for emerging markets where electricity is scant, or not readily available. Much like Samsung’s Blue Earth, particular specs are a bit hazy, but we can tell you there won’t be that many specs to take in anyway, as its main principle is simply all about making calls, which given its target market is completely justified.

Unlike Blue Earth however, it does sport a rather bog-standard looking (and almost unappealing) candy bar design, with the solar panels on the rear. But again this is completely justified, as I can’t imagine eco-friendly mobile owners wanting their phones to resemble and pack all the battery guzzling software and features that come hand in hand with a lot of the standard phones on offer these days (and if they do, they’ll be waiting quite a while before that’s even considered a possibility).

It’s only February and we’ve already seen two solar powered handsets. What does this mean? This just prompts the question – are solar powered mobiles going to be a thing of the future? Tell us what you think in the comments below.