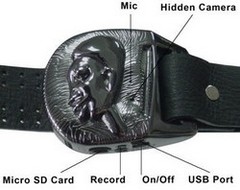 On what will go down in history as one of the most important, influential and inspiring inaugurations of our time, will also be marked by a flood of people eagerly hoping to cash in on Obama mania. Take this for example. The resemblance between this spy camera belt buckle and the soon to be president is non-existent (funny, I don’t remember Obama’s hair ever being that bouffant-like). Even its creators know the similarity is rubbish, which is why they went for the name Obaba instead of Obama and referred to is as “a handsome black man face have a hidden camera and a micro DVR built in”! Yes, the buckle is black and yes, it is a man – that doesn’t make it Obama.

But if people want to make that connection, that’d be ok. What is clear from that though is the belt buckle definitely comes from a non-English speaking company.

I doubt it’d go down well at the inauguration. For a start you’d need to be right at the front, so you can thrust your crotch centre stage, then after around 20 mins of crotch thrusting and gyrating, security would ultimately remove you for being a perverted security risk.

As the image so accurately demonstrates, there’s a mic, a camera, a microSD slot (supports up to 8GB), which all comes encased in a disturbing aluminium casing. You might covertly get it through security, but there’d be no point, unless what you were filming was below waste level – like animals.

There’s no price but it features on the Ajoka website. But seriously, would you really buy it if the opportunity was there?