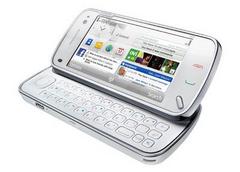 There’s nothing like a classified leak to perk you up and start your Monday morning with. This should wipe away those Monday blues on what is apparently the most depressing day of the year – well, only if the news of the release of an impending super phone gets you as excited as a football fan watching their favourite team win the FA Cup (otherwise this can just be regarded as another Nokia phone release).

It’s uncertain at this time whether Nokia wanted to build up intrigue by unveiling the release details of its eagerly awaited N97 so soon, but intentional or not, the details have been revealed on Play.com, which lists the phone’s in-store release date as 31st March and available for pre-order now.

Nokia is yet to confirm the date and that the phone will only be available in white, SIM free, for £479.99, but the news is sure to cause a stir amongst eager aspirant N97 owners and at least gives them a date to mark down to in their diaries.