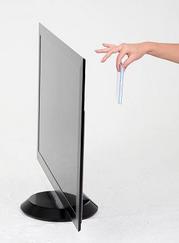 It’s got a wireless receiver hub which all your bits, bobs and PS3s plug into, and from which the signal gets beamed to your telly, which is why it’s so super thin. Is that cheating? I can’t decide.

Thanks to Sony’s MotionFlow technology, “the most frenetic action has a lifelike smoothness”. I do think the word frenetic is not used enough in press releases. There’s also four HDMI ports, with one featuring on the set itself (although if you ruin the lack of wires by adding wires, you suck).