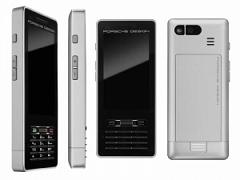 Remember that designer/mobile mash-up from Sagem and Porsche we told you about a few months ago? It was initially tipped for a November release, but a spanner in the works made sure it didn’t see the light of day – until now. Now, Porsche’s second modish handset will be making its official appearance next month with a €600 price tag.

Here’s a little reminder of its spec list – 2.8-inch touchscreen, 5 megapixel camera with flash, autofocus and a bunch of other standard camera features, Wi-Fi, GSM/EDGE connections, GPS, Bluetooth, and a fancy fingerprint reader (ahh the glamour and luxury of a Porsche phone). And of course, it comes with media player capabilities in the music and video arenas. It’s internal brain capacity is rubbish, so there’s microSD support for up to 8GB too.

A candybar Porsche phone is no Porsche automobile, but still, it’s a step in the right direction eh?

[via Know your Mobile]