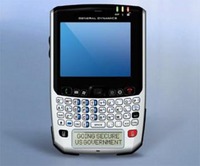 When Barack Obama had to give up his Blackberry for security reasons, we all felt a sympathetic pang in our geeky hearts. But it seems there’s hope for the newly elected president, even if it’s not the most aesthetically pleasing of hopes.

This is the Sectera Edge, which has been approved by the National Security bods in the US, and is one of the most highly encrypted devices around at the moment. It’s rumoured that this could be used by Obama, although only for routine and personal messages.

Under the Presidential Records Act, which came about post-Watergate, any documents relating to the presidency and retained by the White House must be available to the public. Luckily that doesn’t include emails about who’s going to pick up a bottle of wine on the way home, or who’s turn it is to walk the dog, since that would count as personal business.

So, it’s no Blackberry Storm, and it looks like Obama might need another security guard just to carry the thing, but it’s a start. He may not need to break his Crackberry habit.