Now LOTR doesn’t float everyone’s boat. For all those who found Liv Tyler’s locks silky and lustrous, others thought that nine hours of a story based mainly around a forest was a little too much. However there’s no denying that the game spin off was highly anticipated, perhaps not as much as the forthcoming Street fighter game, but seeing as the last peep of hobbit hit our screens a whole SIX years ago, we’re ready for something new.

Having not actually had any hands on time with the game myself, I can only summarize some of the reviews out there, and it’s not looking pretty. Considering they’re published by Pandemic (the people who brought us Battlefront 2) it seems to have fallen pretty flat on all fronts. Hey, epic movies /books don’t always translate that well to the gaming sphere, especially ones where the developers become so focused on staying true to the story they forget to entertain.

Total Video Games say: ‘Conquest looks well set to continue the impressive legacy laid down by Pandemic’s Battlefront games and while we’re certainly disappointed by the lack of multiplayer slots on the console versions, an increased focus on melee combat does make Conquest sit rather more comfortably on a joypad than Battlefront ever managed to.’

BoomTown say: Here we have further proof that EA has mostly wasted one of the best licenses ever. We haven’t had a Mass Effect style adventure RPG, we haven’t had a Total War style strategy game (we got a poor Warcraft knockoff) and here we’ve another wasted opportunity in terms of straight actions games. But I just found it a bit dull. Too dull even to get annoyed about.

IGN say ‘In the end, then, Conquest offers much sound and fury but little substance. In terms of presentation and design, it does a pretty good job of evoking the rich universe of Middle Earth, as imagined by Peter Jackson. But the single-player campaign is rudimentary and brief and the multiplayer modes are fairly few, and they lack any real strategic depth, making it unlikely that anybody beyond the hardcore few will stick with them for the long-term. 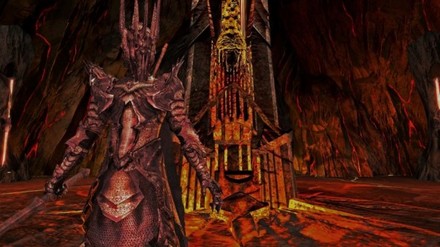 It seems like there was a lot of potential for this game to be a MMORPG killer but due to a shoddy interface and the developers getting a little confused as to where they wanted it to go, it’s a fail. Shame though, as Middle Earth could really have been the place to be.