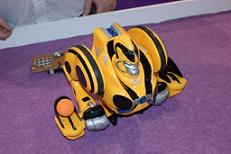 Although we’re not present at Toy Fair this year (think big kids playground or CES for toys) it’s the place where all the journo’s and big kids go to get the scoop on what’s going to be hot in playthings this year.

Take a look at this. What an unusual automaton. Meet the PRIME-8 – a gorilla-esque robot, which thanks to its yellow and black outer shell leads me to believe it could be a distant relative of the mighty Bumblebee from Transformers. The bright android comes from those clever robot purveyors at Bossa Nova (are they trying to steal the crown from Wowwee?). Switch him on and watch him run on his hands at speed and do what sounds like very ape-like movements from side to side. Underneath his tough outer shell, there are eight built-in games, such as flinging soft balls at his sensors, which all sounds a bit pointless/tedious until you hear that this includes hitting him in his anatomically incorrect groin area. Pent-up male related aggression never sounded so fun.

It hits the shops in the summertime for £80.