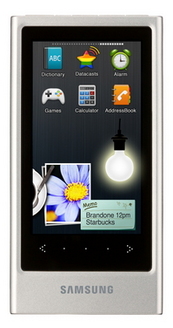 Feast your eyes on Samsung’s attempt to compete with the iPod Touch – it’s rather fetching don’t you think? Other than a giving it a name lacking in creativity, the P3 is a musical device worth putting some pennies aside for. It’s 0.39-inches thick with a sizeable 3-inch WQVGA TFT-LCD touchscreen. And that’s not all – it comes complete with haptic feedback which works all very nicely in 16:9 widescreen.

The P3 is so much more than your average MP3 player (by going up against the iPod Touch it had to bring something to the table), for example, it’s Bluetooth enabled, allowing you to receive phone calls using its built-in mic and a pair of headphones.

When they launch, which is sometime before July, they’ll be available in 4, 8, 16 and 32GB flavours. It sounds like it could do well, but the success of this device all rests on the price tag Samsung attaches to it, which only time will determine.

One thought on “CES 2009: Samsung rivals the iPod Touch with the P3”