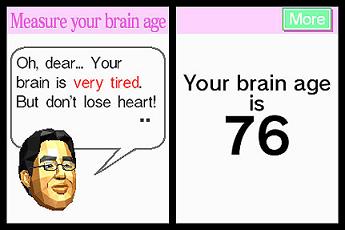 So, Nintendo’s Brain Training isn’t as good for your brain cells as it claims – which is great news, as now I don’t feel so bad for being told I have the brain age of a 39 year old (Dr. Kawashima was right, I was tired). For something that was waxed lyrical about and was understood to boost intelligence and improve your brain age, it sure is eating its words now. The Suduko/puzzle playing game-play has been equated to “pencil and paper” or Scrabble, when it comes to improving mental acuteness, with the latter apparently being just as good.

This shocking revelation comes from a professor of cognitive psychology at the University of Rennes, who conducted a survey testing and comparing the effectiveness of a pencil and paper and a copy of Brain Training on the development of the maths skills of a group of ten year olds. What he found out it, is Brain Training is about as beneficial to learning as watching documentaries and playing board games.

So it turns out isn’t beneficial to your brain at all. That means Ronan Keating and the rest of those DS playing celebs were in fact lying to us all along or were tricked into some kind of Brass Eye-esque scam to talk profusely and positively about something they didn’t entirely now about and understand (remember Noel Edmonds and cake?).